We couldn’t visit America without going to Vegas. It seems like everyone except us had been, so we wanted to see for ourselves what ‘sin city’ is really like. Does it live up to the stereotypes?

From TV and movies you get the impression that the Las Vegas strip is fairly compact, with all the hotels clustered together. The reality is a bit different. While the central section is walkable and a number of the famous casinos are around here, staying at either end means a lot of boring walking – the whole strip is over 3 miles long!

There are buses, but they cost a ridiculous $6 per ride, and also a monorail at $5 per ride which is quite limited.

Most usefully, there are 3 free ‘tram’ (more like people movers at airports) services. One runs between Treasure Island and The Mirage and while not hugely useful in terms of distance, is better than walking and offers a nice view. There is another between the Bellagio and the Monte Carlo which we didn’t even know about until writing this post. And the third connects Mandalay Bay, Luxor and Excalibur.

Overall car was the only way we were going to see the outer fringes of the strip. So it was lucky we still had ours! The great thing is that you can drive right into any posh hotel or casino and be sure you can park for free – they all have giant parking garages. You can use valet parking for the cost of a small tip but we opted for self park, of course.

We stayed at the famous Circus Circus, mainly because it was one of the cheapest on the strip. When we arrived and found out how far it was from everything, we were initially a bit disappointed, but actually I’m really glad we stayed where we did.

The majority of the big hotels now date from the 1990s and later, whereas Circus Circus has been going since 1968 (it shows in some areas!). It was cool thinking of all the years of gambling history under that famous concrete big top and the neon clown sign. It’s even part of the Hunter S. Thompson classic Fear and Loathing In Las Vegas (though sadly isn’t in the film).

Speaking of history though, one thing made me sad. We didn’t see the ‘Welcome to Las Vegas’ sign. Why?? Um…we forgot. We intended to drive up to it on our last day but it just slipped our mind. Vegas is overwhelming, what can I say.

What maybe surprised me most about the casinos was how they catered for everyone. It probably sounds stupid, but I thought low rollers like us betting a few dollars here or there would be marginalised, but in fact the penny slots are mixed in with the $25 ones. You even get free drinks service wherever you’re sitting (as long as you tip well enough).

Oh yeah, penny slots. I didn’t know these existed until we got to Vegas. I was expecting the lowest slots to be 25c a spin so the penny ones were a nice surprise. Granted, betting 1c at a time is never going to win you much, and in reality you tend to bet multiple lines so 10-20c at a time. We actually got some ok returns from them, and while we didn’t end up with a profit, our loss was only a couple of dollars, when we put at least $20 in.

I, for some reason, thought we would eat like kings in Vegas for very little. I expected $5 buffets and virtually free steak. It isn’t like that.

Buffet’s are still popular – every hotel/casino offers one. But they are just regular priced, say $15, which isn’t bad but not amazing.

And aside from that, dining options (fast food excluded – Casino Royale does a giant hot dog for $1.99) are more upmarket than we expected. So we had to do our usual Chipotle, In-N-Out and Panda Express rotation. Though our hotel did have a really good, well priced Mexican restaurant so it wasn’t all bad.

In fairness when researching online, there are still some deals on steak dinners, but they mostly seemed to be downtown, around Fremont St, which we didn’t get to visit this time.

Vegas has the reputation of being an adult’s playground where anything goes, and it does live up to that to some extent. For example, it’s one of the few places in America that you can walk around with open alcohol containers. You can even walk into any casino with a can of beer. Smoking is also allowed on casino floors, which was a surprise. 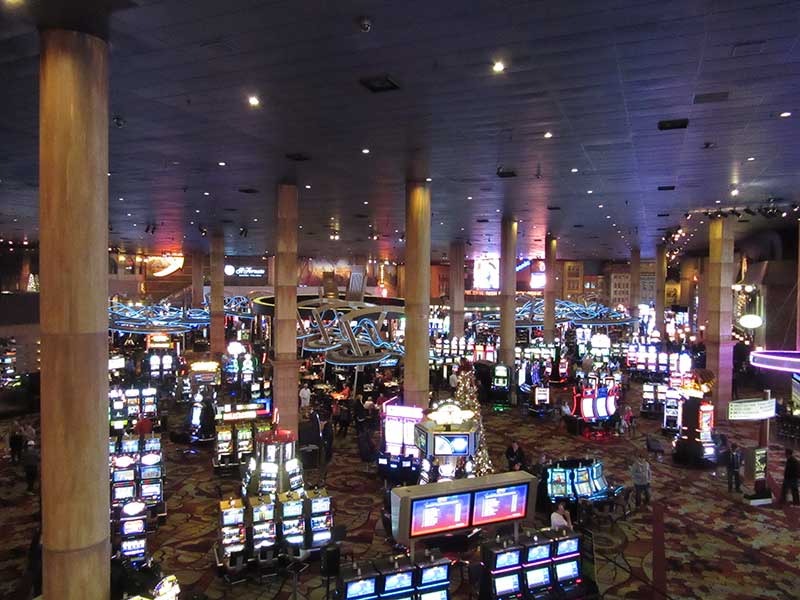 One day we spent the entire day inside Circus Circus without thinking about leaving. We bought a day pass for the awesome Adventuredome Theme Park (highly recommended and only $25 per person), went on the roller coasters approximately countless times, felt a bit ill, ate lunch at one of the many restaurants inside the complex, gambled at the casino and watched some circus acts.

It was only around 8pm we realised we hadn’t tasted fresh air all day, and went for a walk down the strip.

The awesome new El Loco coaster – rode this about 8 times!

Even when we ventured into other casinos, it was a mission to get back out again – signage seemed to be deliberately few and far between, and there was always something to distract you. None of this surprised us – after all the longer you stay the more money you will spend.

As Vegas virgins, most of our time wasn’t spent gambling, or seeing shows. It was spent exploring all the shamelessly tacky themed casinos with their various attractions. Marvelling at the Luxor pyramid, seeing the Bellagio fountains and wandering around ridiculously over the top New York New York.

One thing I was desperate to do was ride the huge outdoor roller coaster at NYNY, but I chickened out due to the price (something like $15) at the last minute. Regret that a bit.

We were surprised just how cheap it is to stay in one of the famous Vegas hotels. While some are probably very expensive, a lot are reasonable – for example for a bit more cash we could have stayed at the Luxor.

But you have to be careful with the advertised low rates. All hotels on the strip charge a resort fee per room per night which isn’t included in the price advertised. Officially it covers things like free coffee, WiFi, newspapers, but as it is mandatory it obviously just exists to allow the hotels to offer artificially cheap rates.

Furthermore, most hotels have tax on top of all this. So it can add up. However it is still good value. For Circus Circus we paid a total of £26.11 per night, resort fee and tax included. That is pretty amazing for a decent 3/4 star hotel. I think we were lucky that we were visiting at a very quiet period though.

A lot of the cheaper older hotels are apparently a bit dated (quite a few still don’t offer any WiFi for example) and certainly our room screamed 1990s renovation. But it was still really clean and comfortable, so we can’t complain. Vegas is one of the few places in America backpackers can get a bit of luxury.