It may be Southeast Asia’s most expensive city but you can do Singapore on a budget. Just.

I can’t say I’ve always wanted to visit Singapore, because I haven’t. It sounded expensive, too sanitised and a tiny bit boring. I was sort of right, but we still liked it.

To be fair, Singapore isn’t boring in the slightest…if you have money. If you’re on a budget like us, there is still more than enough to do, but you always feel like you’re missing out slightly.

Our first free sight was the botanic gardens, which were really impressive. Compact enough to walk around but still quite vast, we spent a couple of hours admiring the orchid garden ($5 entry but worth it) complete with ‘VIP’ orchids created especially for heads of state and royalty, and the amazing evolution garden which chronicles plant life from the dawn of time to the present day. It feels like walking through Jurassic Park for parts of it! 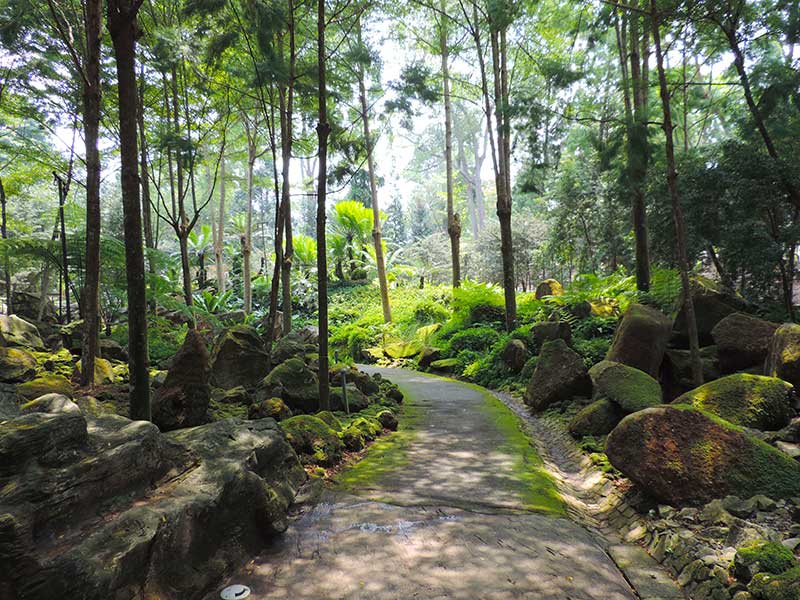 We headed next to ‘Gardens By The Bay’, a relatively new attraction near Marina Bay Sands, one of the most famous buildings in Singapore (it’s the one with the boat on top of it)

These gardens were distinctly futuristic, with some immense vertical tower gardens (called ‘Supertrees’) alongside more traditional gardens in modern surroundings. The two main attractions, the cloud forest, a huge glass structure with an indoor waterfall, and the flower dome, were just too expensive for us to visit sadly, a trend which continued during our time in the city.

We returned to the bay the following night to check out the light and laser show emanating from Marina bay Sands, alongside the immense cityscape of the financial district.

The Marina Bay shopping centre is ridiculous, never before have we felt like such paupers. Wall to wall designer shops, champagne bars and expensive eateries. The centre even has it’s own canal and gondola rides!

The next day we took a trip out to the suburbs to a public swimming pool. If there is one activity you can do on a budget in Singapore, it is swimming. There are loads of public pools, charging an entrance fee of just $1.50 (all costs are in Singapore $, £1-$2). We chose Sengkang Swimming Complex and it was amazing.

Much fun was had

We were pretty much the only westerners in the whole place but the great thing about Singapore is that no-one cares! No getting started at, you can just enjoy yourself. And enjoy ourselves we did, by going on the slides approximately 12 times.

My one criticism of Singapore, aside from it being expensive, is that almost everything seems to have been torn down in the name of progress. There are hardly any old buildings left. The beautiful Raffles hotel is one notable exception, as well as Little India, where our hostel was located – there the old townhouses still remain. But for the most part Singapore is modern, beautiful, but a tiny bit soulless.

The food of course is incredible. No street food vendors are allowed in Singapore, instead there are indoor hawker centres, but they retain the crazy Asian street food atmosphere. We of course visited a few.

The first was the Chinatown food centre. As soon as you get off the MRT at Chinatown there are souvenir stores and overpriced restaurants abound, all full of tourists. So with the food centre being only a few minutes walk away it was bound to be full of tourists too. Nope. We were the only white people there. There is a complex with 50+ dirt cheap food stalls and yet everyone is eating at the tourist traps? Crazy.

Not that it bothered us in the slightest. We filled up with lots of satay and some crispy popiah.

We also visited the Tekka Centre in Little India. This is home to a rather smelly wet market on the bottom floor but persevere and you’ll eventually reach the food area where the smell of tandoors and bubbling masalas overtakes that of fish.

Katy had some butter chicken with naan and I had a biriyani with chicken curry. Both were sublime and cost us around $5 for each.

Another discovery in Little India was on Serangoon Road – Azmi Chapati. $0.80 gets you a freshly cooked chapati, the best you’ve ever tasted, and $3.60 gets a bowl of mutton curry to dip it into. It. Was. Amazing.

We sadly didn’t get to try Singapore’s most famous food – chilli crab. If I’m honest, neither of us are huge fans of crab (mainly because it’s such a pain to eat) so it felt silly to get the dish just because it’s famous and miss out on other food when we were only there for a few days. Maybe next time.

A famous dish I did try – Singapore Laksa

We arrived by bus from Melaka. The trip took around 4 hours all in all, including customs. The Malaysian leg is around 2 hours, with a lunch stop en route. Then you reach Malaysian customs at Johor Bahru where you exit the bus and get stamped out. The bus drives on over the causeway to Singapore, where you need to exit the bus again, this time with all your belongings.

It goes without saying that Singapore is fairly strict about what you can and can’t bring into the country. The most important one to remember is that NO alcohol can be brought from Malaysia into Singapore, to discourage booze runs (it’s far more expensive in Singapore). More than likely it will just get confiscated if you declare it but if you take the risk, bring it in and get caught, the fines could be enormous.

For this reason, I got rid (into me and the rest down the sink) of the last of the Langkawi duty free rum I had. Sad times.

The other thing to remember is that if you are bringing any tobacco into Singapore, you will have to pay duty on it at pretty extortionate rates. Again the fines could be monstrous if you don’t declare and get caught.

All that aside, the customs process was all quite quick and non threatening, despite all the scary signs everywhere, and soon we were back on the bus and in Singapore proper.

It took around 40 minutes to reach our destination which we naively assumed would be a bus station but actually turned out to be a random street at least 1km from the nearest MRT station. With no local currency (nearest ATM was at the station) buses were impossible so we had a long walk in the sweltering heat. I wish I could remember the name of the bus company so I could tell you NEVER TO USE THEM (if I do I’ll post it here).

While in the city we used the MRT almost exclusively to get around. It’s cheap but not as cheap as Malaysia or China, and so the fares can add up (they’re around $1.50-$2.20).

We stayed at Mori Hostel, which was 5 minutes walk from Farrer Park station in Little India. It’s a boutique hostel, but without the boutique prices that some places in the city were charging. Needless to say, it still isn’t cheap – for both of us it was around £23 per night. But the beds were comfy, the WiFi was fast and the breakfast was pretty good. We liked it. 8/10

If you’re interested in old Singapore, I highly recommend this fascinating blog.

What Did We Spend?

All costs over 3 nights/4 days