Slightly anticlimactically, after being delayed 3 days, we arrived in Mexico City. We’d also of course, missed New Year’s Eve, so there was no party to be had.

After a day of 3 flights, we finally arrived at our hostel at 9pm, shattered. We wanted food, but all we found was street after street of closed shops and restaurants, and a slightly intimidating atmosphere. We chickened out and ended up getting dinner from a 7-Eleven. Not a great start.

I’m not sure what was going on that night but luckily the next day the city centre was full of the hustle and bustle you would expect. We were staying near the Zocalo (central square) so our first day of sightseeing was remarkably easy.

We started with the Metropolitan Cathedral, which we could see from our hostel windows. Inside it was as vast and beautiful as you would expect. We aren’t religious but enjoy sitting down for a while in Cathedrals and enjoying the calm and peaceful atmosphere. 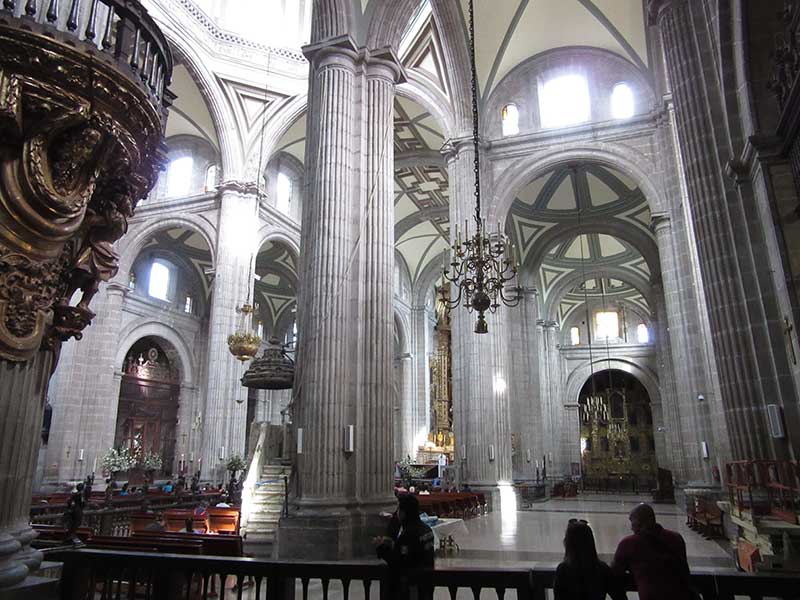 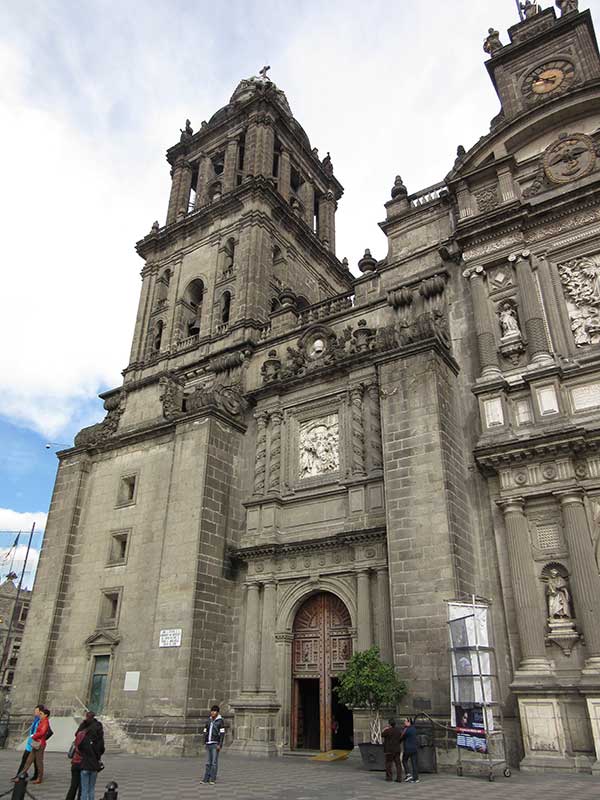 Next we wanted to visit the National Palace, on the other side of the Zocalo. However it is closed according to Wikitravel and certainly didn’t look even slightly open when we tried to get in sadly.

Probably the biggest must see within the city itself is Templo Maya. Usually temple ruins are not smack bang in the middle of a city, because people don’t tend to build over them, but that is what happened here.

The Aztec temple was destroyed by the Spanish in the 1500’s who then built a cathedral over it. Although not completely forgotten about, it was not excavated until 1978 when some workers found a a huge carved stone disc, and a full excavation began, resulting in far more levels of the temple than were previously known about. 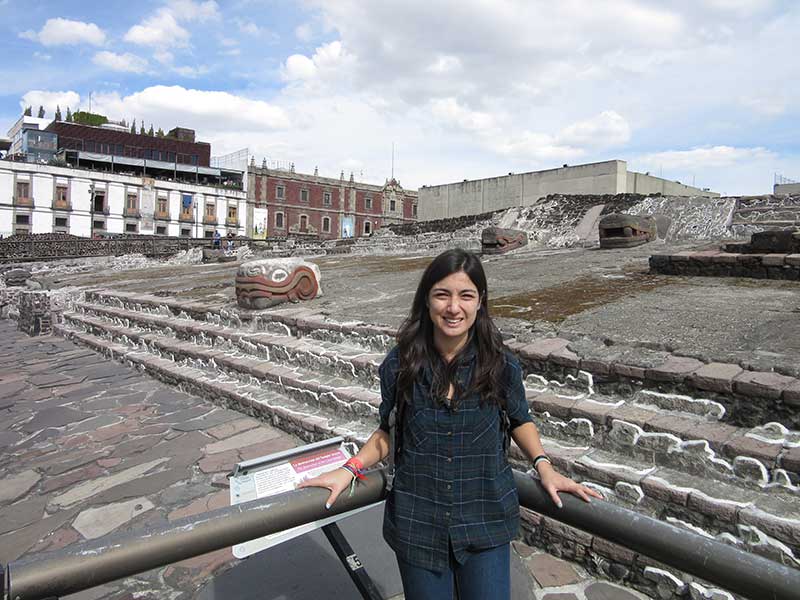 While not on the same scale as some temple complexes, it is a genuinely impressive sight and well worth a visit and the 60 peso entrance fee.

After our pathetic first night’s meal, we splashed out a bit and visited Cafe de Tacuba, an extremely popular restaurant a short walk from the Zocalo. I stupidly didn’t get any photos of the stunning interior (it’s in a former convent) but we enjoyed a great meal of tacos for Katy and for me enchiladas with my first taste of mole sauce – it’s a rich complicated sauce but one of the main ingredients is chocolate – an interesting taste but it does work. It’s insanely popular in Mexico.

The next day we used the metro which costs a crazy 5 pesos (20p) per ride and headed out to Chapultepec, which is famous for it’s park and it’s museums.

Firstly we enjoyed a leisurely stroll around the park and saw how most of Mexico City spend their weekends. Spotting a crowd of people sitting down we thought it must be something interesting and we were treated to our first Danza de los Voladores, aka Dance Of The Flyers. 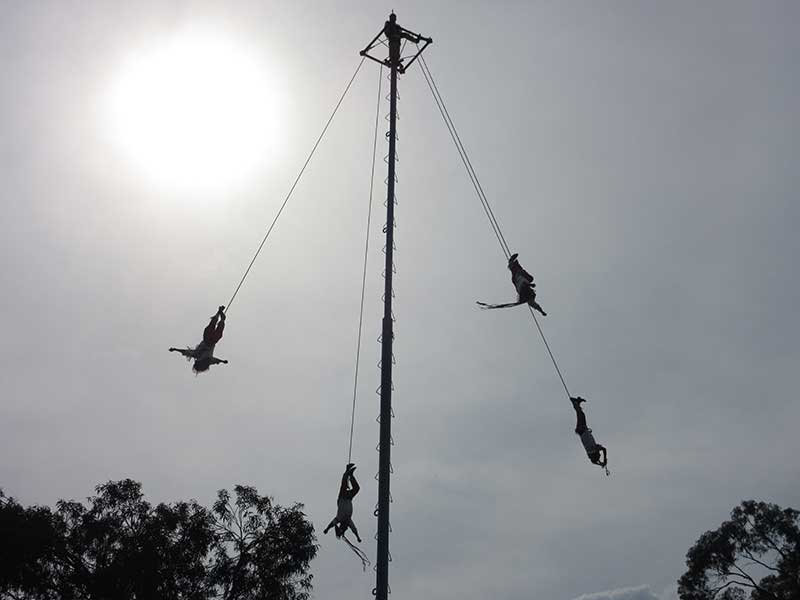 It started with 5 men playing music – nice but unremarkable. However they soon ascended a 30m high pole and all sat at the top (still playing music). We then watched in awe as 4 of the men attached ropes to their feet and set themselves flying around the central pole. Over time, with the 5th man playing music at the top, they steadily got lower and lower until their heads were almost scraping the ground!

As for the museums, there are a lot so we only had time for one, and it was a no brainer for us – the National Anthropological Museum. Often touted as one of the world’s great museums, it’s hard to disagree – it’s epic. A giant complex (you could spend 6 hours and not see everything) covering all of the various indigenous groups of Mexico in incredible detail – we loved it.

The imposing museum of Anthropology

On the way back we stopped a couple of stations up and visited La Merced, which is the main city market. It’s a total labyrinth and very hard to find your way around but it was a fascinating visit, albeit with a lot less food stalls than we anticipated sadly. No photos since it’s reportedly pickpocket central and I didn’t feel comfortable getting my camera out.

In the evening we walked down to Plaza Garibaldi, famous for its many, many, many Mariachi bands. The square itself was actually a bit of a disappointment – I had expected bars and restaurants all around but actually there were just a few on one side. We had some overpriced beers and tacos and watched the bands perform for others as we couldn’t afford one ourselves. 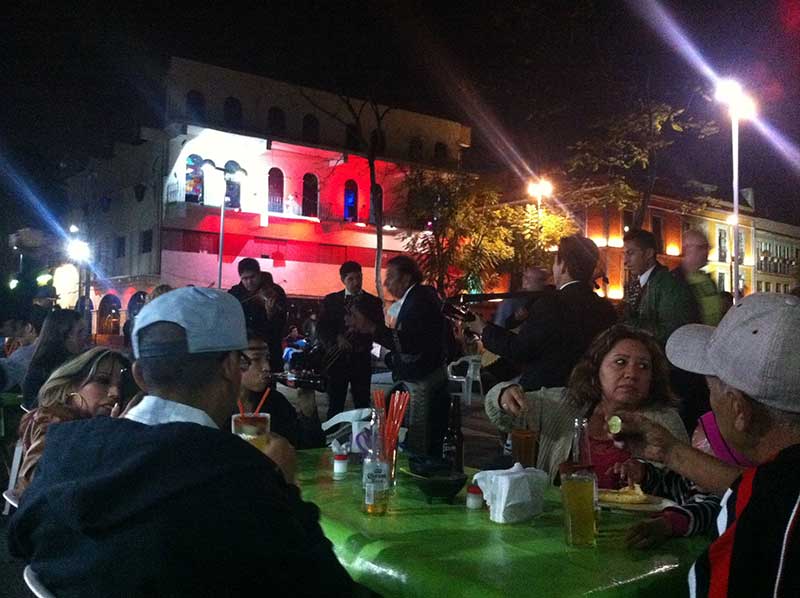 Afterwards we wandered across the square and noticed the Tequila and Mezcal museum – how could we not go inside? For just 50 pesos each we spent time learning about the production process of the famous spirits – did you know that Tequila is a Mezcal, but can only be produced from blue agave in the region of Tequila?

A good night to be had here…

Both drinks are made from agave though, the hearts of the plant are baked, mashed, fermented and then distilled into the spirit. Included in our entrance ticket we received a shot of both in the terrace bar overlooking the square.

On our final day we took a trip out of the city to see the incredible ancient city of Teotihuacán. Situated around 40km from the city and accessible by bus, we were a little worried by reports of hijackings en route but unsurprisingly it was all fine.

The site is pre Mayan and consists of several epic pyramids and numerous other smaller structures. It’s a large site and requires plenty of walking but unlike some others in Mexico you can climb the pyramids for some awesome views. The biggest is the Temple Of The Sun. 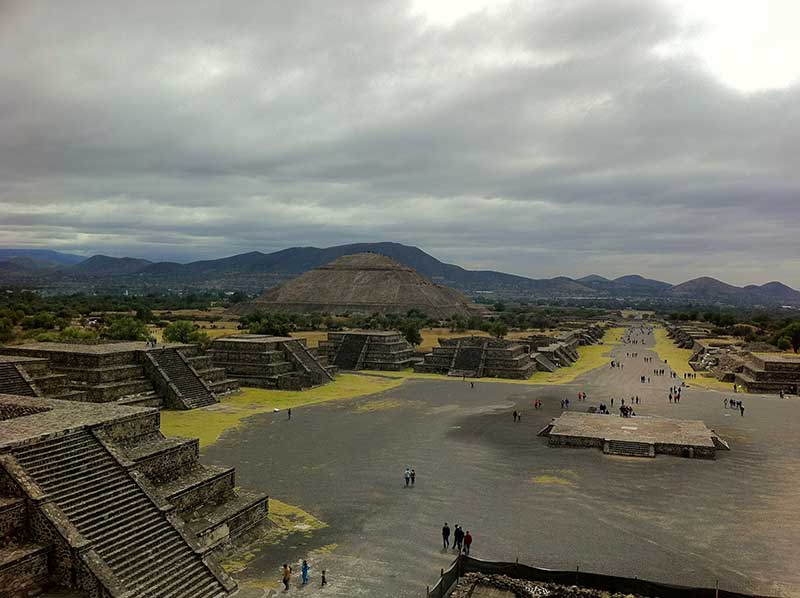 After a few hours exploring the site and the excellent museum we headed back.

We spent one night less in Mexico City than we originally planned to, because we arrived late and wanted to make up for lost time. However it’s an exciting, bustling city with tons to do – we could have spent a week there and not covered it all.

We stayed at Hostel Catedral which apart from the awesome location, we weren’t hugely keen on. The dorms had creaky beds, it was enormous (we prefer smaller hostels) and the WiFi was horrific. The plus sides were self service laundry (very rare in Mexico), free breakfast and a terrace to enjoy the view over the city.

To get into the city from the airport, you can buy a pre paid taxi voucher that is priced per zone. It isn’t cheap though, ours cost 210 pesos and the ride was about 20 minutes at most! That said, the area around the airport is apparently not the safest so you don’t want to be wandering around looking for cheaper. It is connected to the Metro though which we used when we left, though it was a nightmare with big backpacks.

Visiting Teotihuacán is quite easy and you don’t need any expensive tours. Just get the metro or take a taxi to the Autobuses del Norte terminal, head to the left side of the building and there is a counter with a pyramid on the sign. Ask for tickets to the ‘piramides’ which cost 88 pesos return.

The bus drops you off outside the main entrance, where you can buy tickets and then it’s a 5-10 minute walk to the site. To leave, there are a few bus stops (no signs though) on the road around the site – we exited near Temple Of The Sun and were directed to a stop just past the car park and only had to wait 10 minutes.

The trip back goes through the pretty town of San Juan Teotihuacán, although it’s a bit disconcerting when it stops there and boarding passengers are searched and metal detected, and also police come on board and film every passengers face. It’s good that they do it though, and probably means the robberies are now far rarer.

The weather was quite cool when we visited but on hotter days you could be obliterated by the sun as there is little shade. There also isn’t much food on sale inside apart from snacks.