Hoi An had a lot to live up to. Not compared to anywhere else specifically, but just because we had heard so much from so many people saying it was their highlight of Vietnam. Would it be ours?

First impressions were great, our taxi from Da Nang taking us from the grey city, past rice field, to Hoi An. We arrived at a lovely home stay we had booked a few kilometres outside of the old town, which we decided to walk to after settling in.

When people talk about Hoi An, they do generally mean the old town, which by luck has remained unchanged for hundreds of years – in Vietnam this is VERY rare. The country as a whole ruthlessly charges towards the future and the decades of war didn’t do anything to help preserve buildings either.

Hoi An was luckily spared during the war, and survived modernisation when the river became unsuitable for shipping and nearby Da Nang became the port town instead. What is left is the old centre which completely consists of traditional style Vietnamese buildings, and the newer areas around it, which are still very quaint despite not being as old. 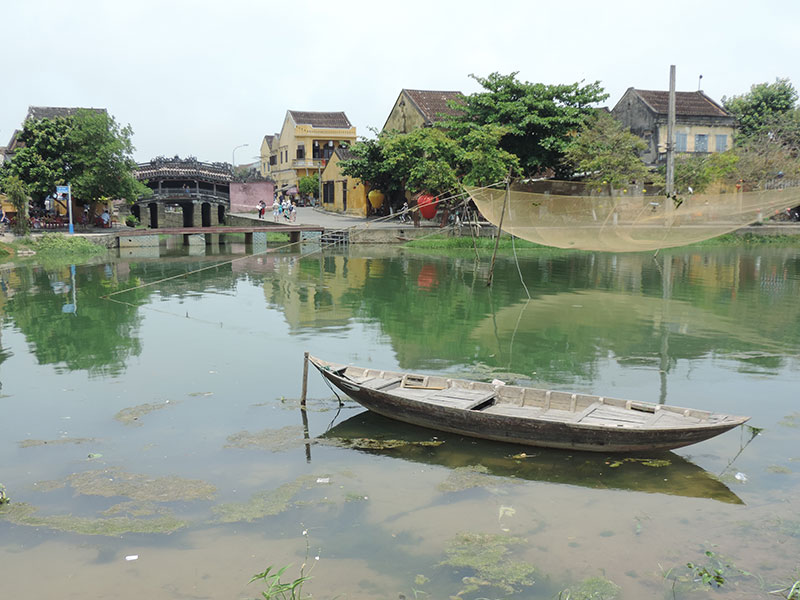 Quiet morning on the river

Unfortunately the popularity of the old town has meant it is now completely and utterly devoted to tourism, you won’t find local people living here and local eateries are few and far between. What you will find is lots of restaurants, tailor shops, souvenir shops and some museums and ‘ancient houses’ which are traditional family houses preserved for visitors to see. 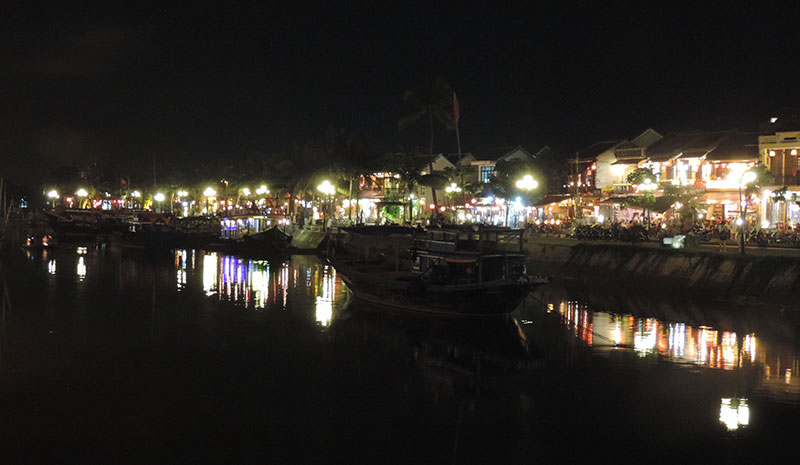 On the first day we rented some bicycles (one of the great things about the town is that it is almost perfectly flat) and headed to the centre. Without thinking, I instantly decided to buy 2 old town tickets – these allow entrance into 4 or 5 sights out of a large number of ancient houses, museums, assembly halls and temples. The problem was, they weren’t particularly cheap, and we didn’t know what we wanted to visit at that stage. But once I’d splashed out we had no choice but to spend the day going to various sights.

It didn’t turn out to be the worst decision ever but it was a pain trying to find enough things to see. It was extremely hot and it wasn’t the most pleasant experience being inside small cramped buildings with no ventilation.

We ended up seeing one ancient house: 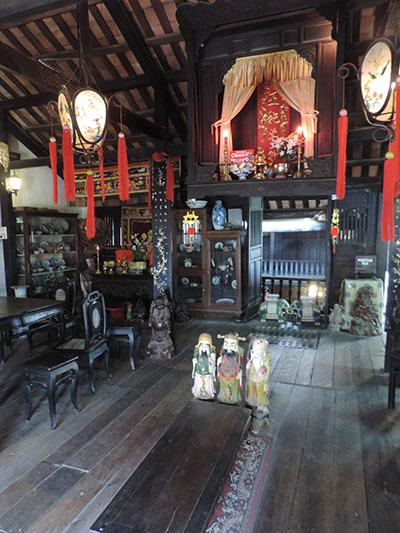 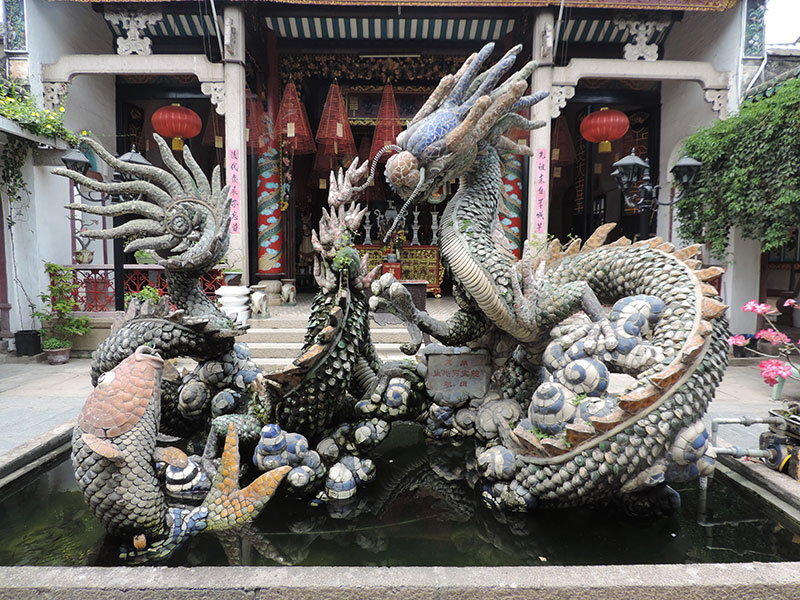 Ok so this isn’t the hall itself

I really liked these dragons 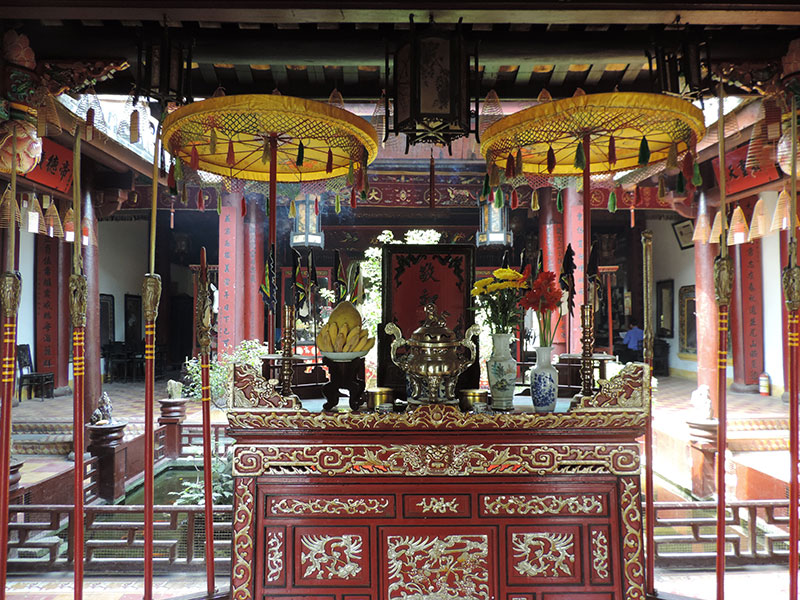 The assembly hall and temple were genuinely impressive, I particularly liked the pottery shard dragons at the former. The ancient house was ok but just seemed set up to sell things rather than being informative in any way. The museum was poor, the old photos were interesting but the exhibits consisted of a few pots and it was all very dated. Overall it was ok but I can’t help thinking we would have enjoyed it just as much had we cycled around looking at all the lovely buildings (for free!*)

We also saw the Japanese covered bridge, dating back to the 16th century. It was tiny but really nice. This is supposed to take one  of the tickets we’d paid for, however there was no-one checking them.

The next day we decided to visit the beach, around 4km from the town. We took our bicycles again as it was a fairly safe road, and a beautifully scenic ride past rice paddies and a river. We stopped for refreshments at a place right next to the river. 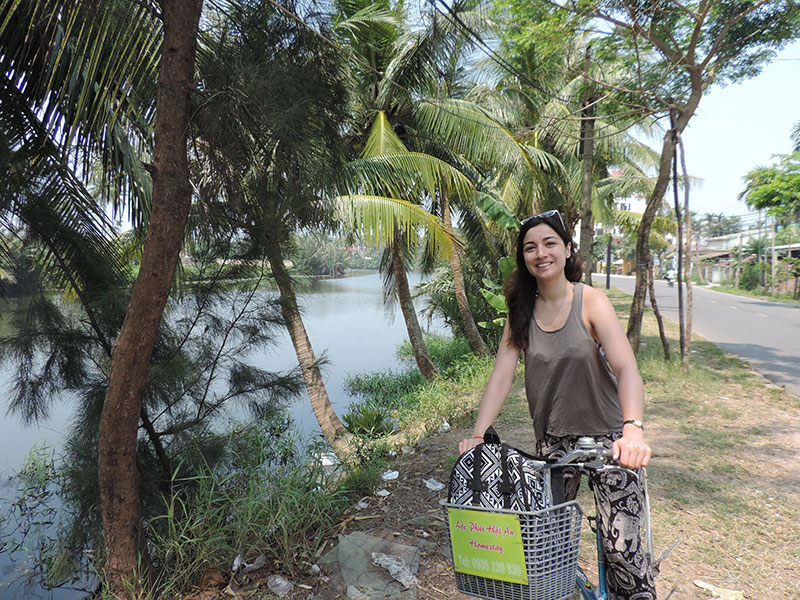 Once at the beach we were fairly underwhelmed, but in fairness it really wasn’t a bad beach at all. I wouldn’t come to Hoi An just for the beach though. 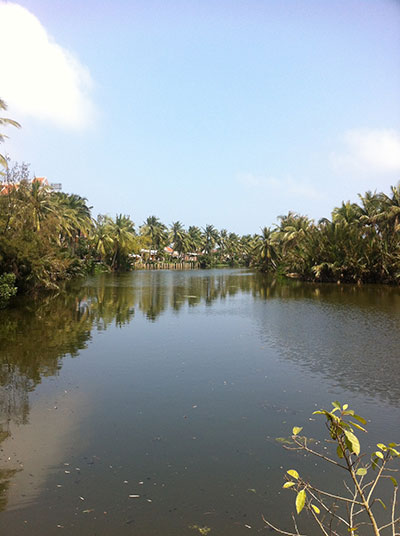 One of the real highlights of Hoi An was the food. This is one area where the hype is definately justified. As with most towns and cities in Vietnam, there are regional specialites. In Hoi An these are White Rose (steamed prawn dumplings), Cao Lau (thick noodles with slices of pork, crispy fried bits and greens), Mi Quang (noodles with meat, rice crackers and some delicious broth, but drier than Pho) and crispy wantons. We loved all of these, but White Rose and Cao Lau were our favourites. 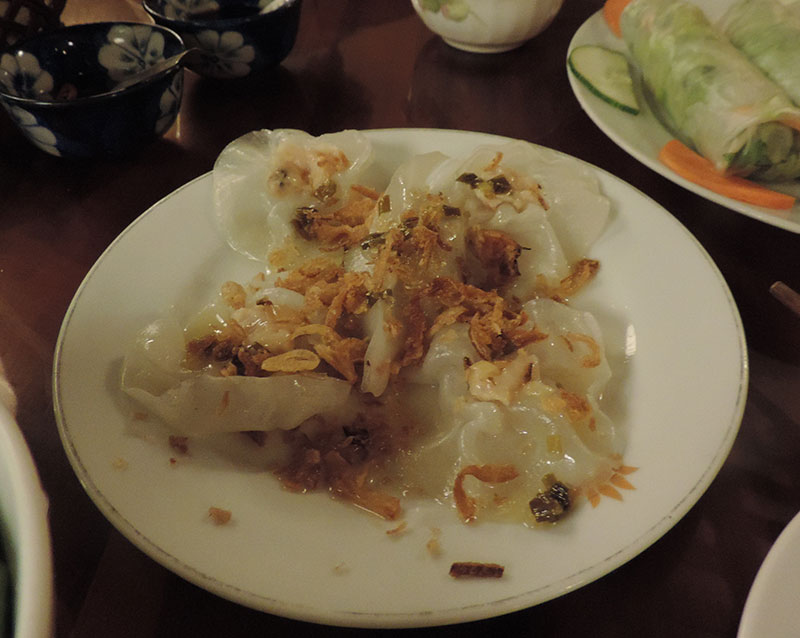 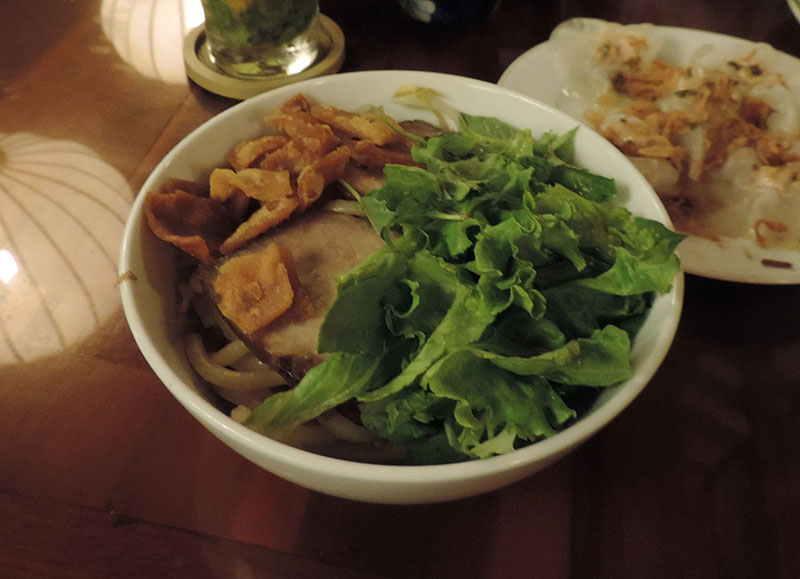 Our best meal however involved none of the above. Recommended by some friends, we went to a small back alley restaurant calld Bale Well, where for a set price they bring out as much grilled meat and Banh Xeo as you can eat, which you wrap in rice paper with plenty of veggies. I think I left about a stone heavier, but it was well worth it.

Chowing down at Bale Well

After all that food, something is needed to wash it down. Thankfully Hoi An is the best place to get Bia Hoi (Fresh Beer) in Vietnam. It’s as little as 3000 dong (8 pence or 14 cents) per glass and it is genuinely really nice beer. I was in heaven. It’s served perfectly chilled and can be found in most restaurants, which is a slightly more refined experience than sitting on the street in Hanoi. 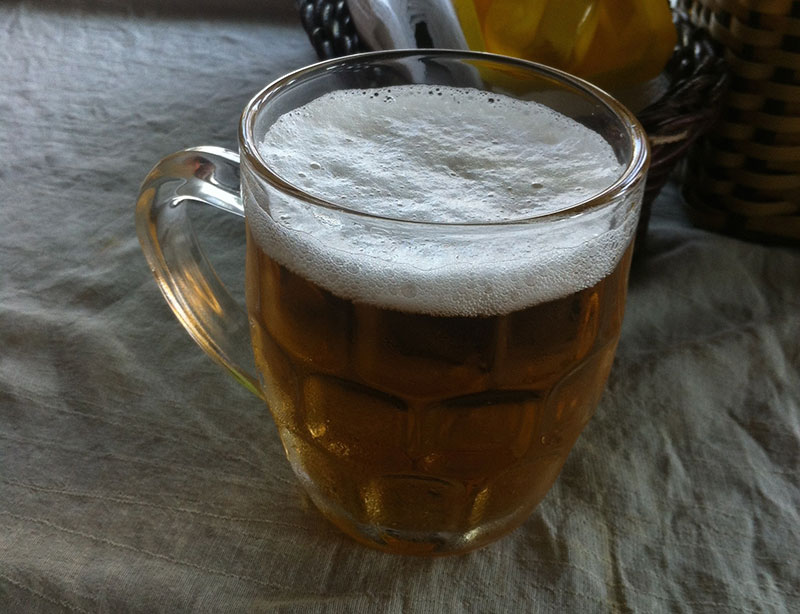 Cheapest beer in the world (probably)

As if Hoi An isn’t already famous for enough things, it is also known for its countless tailors. Suits and dresses are the most popular, and it was the latter that Katy got made. She went for several fittings and the shop were happy to make alterations until she was happy with it. The resulting dress was beautiful, and only $25. 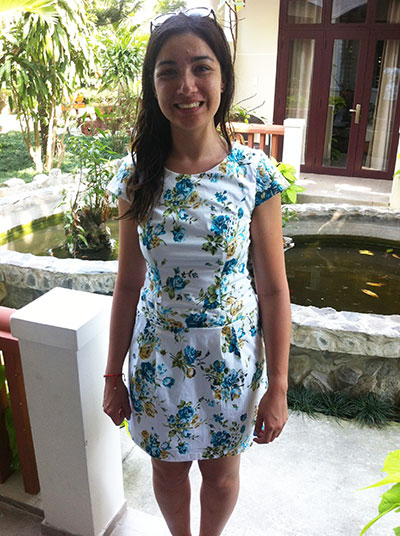 Katy also got some nice sandals made which again were very reasonably priced. Me? I just stuck to the cheap beer.

So after all this waffle, did we find the town overhyped? Well I was originally going to say yes, but having written this and remembered all that we did there, there really wasn’t much we actually disliked. It’s a lovely little town, and perhaps the only slight criticism is the aforementioned tourist slant, so it can feel a little fake at times. But perhaps that doesn’t matter when the end result is so charming.

Purely from online reviews, we opted for Loc Phat homestay. I always thought homestays were akin to staying in the spare room of someone’s house, but this couldn’t have been further from that. Almost brand new buildings with large double rooms, verandas/balconies and a lovely quiet garden setting make it very peaceful. It is around 2km from the old town, but with bicycles that distance is easily covered. It’s also 1 minutes walk from a fantastic Banh Mi stall! The staff were super friendly and offered plenty of tips on where to go and good places to eat. Can’t recommend this place enough.

* while looking up some things while writing this, I see that since we visited, Hoi An has changed the ticket system and you now need to buy one even to look around the old town. So it looks like you have little choice but to get them now.